I recently went into hospital in Pafos to have a knee replacement and was told I would have an epidural rather than a general anaesthetic. I was taken into the operating theatre, which reminded me of the paint booth we had at Paxman, and was told the operation would take two hours. They placed a screen in front of me and set to work on my knee. I wish they’d advised me to wear headphones as, even though I felt nothing, I could hear drills, saws and the chipping of bone.

The operation, true to Cypriot time calculations, lasted four hours but the care I had in hospital was great. I was ready to go home on the Thursday after my Monday operation, but they said I would have to stay until the following Tuesday. However, I was allowed to go home on Sunday as my recovery was ahead of schedule. I have been back to thank the nurses and as soon as I walked into the ward they all came and greeted me, so I could not have been that bad a patient. The same can’t be said for the physiotherapist, who I did not get on with. She wanted me to do more than I could with a swollen leg. Fortunately, her boss agreed with me.

When I was twenty one I failed to follow the advice given in the sex education classes at school, and got a girl pregnant. I wanted to ‘do the right thing’ and marry her, but ultimately took the advice of my family and payed maintenance for the child. A baby girl was born, but I had no contact with her while she was growing up. For years I’ve been looking for her without success, and really felt there was little hope that I would never see or hear from her.

Then, on Monday 24th November 2008, I received an email from Friends Reunited saying that Shirley Ault would like to be my friend and asked me to accept or decline. I was just about to press the decline button when I thought ‘Hey! my school was all boys’, so I pressed accept to find out which one of my mates had had a sex change. But it turned out to be my daughter, who is now 41, and she told me I had two grandsons, aged 18 and 21 plus a great grandson of 8 months. She said she would like me to contact her but would understand if I did not. I sent an email straight away, with my phone number and email address, and hoped she would contact me. I waited by the computer with the phone at my side, my heart pounding like a kid on his first date. The phone rang and for the first time I heard the voice of my daughter, it was better than winning the lottery. 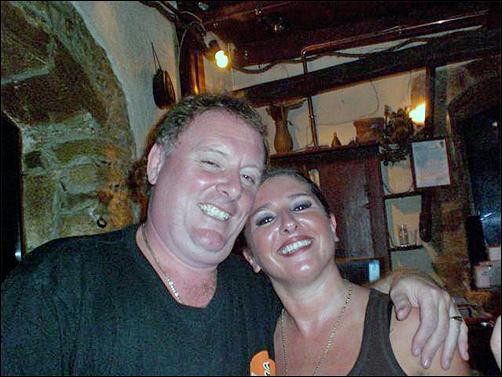 We talked for hours and she told me she lives in Crete which is not far from where I live in Cyprus. She had been looking for me but under Victor, and even had a private eye trace me. But he lost the trail when I moved from Colchester. Then, on Monday, she asked her husband how to spell Vic. ‘Was it with, or without, a K?’ He said without and she typed my name. She was in shock as she realised she’d found her Dad. We talked so long that the battery on her phone ran out.

After the phone call I went all over Paphos telling everyone that I’d found my daughter, and she went all over Crete telling people she’d found her Dad. We wanted to meet each other so much that she was looking for flights to come to Paphos to see me. I phoned her on Wednesday and after 15 mins she said that Tony, her husband, had sent me an email. I checked, and there was a flight confirmation for me to fly to see them for a week next Wednesday. They have built a new house and want me there for the house warming. I was totally shocked.

One of my grandsons has contacted me with a picture of himself and his son, but I think the other one is in a state of shock. I hope that, in time, he’ll come round.

I have composed a family tree for Shirley, and gathered as many photographs as I can of relatives that she has no knowledge of. I’m the happiest person on the planet as I utter the words ‘Hello Shirl, this is your Dad’, which I never ever thought I would.